Elizabeth Dvorak, CEO of Workscapes, recently appeared on the seventh episode of the Elevate Today Podcast.

Elizabeth talked about her roots and how family played a large role in her and her husband Dick Dvorak (the President of Workscapes) starting the business in Orlando Florida. They started with 6 employees in 1998, and eventually expanded to the South Florida market in 2001. In 2013, Workscapes forged a partnership with Herman Miller and expanded to the Tampa, Ft. Myers, & Jacksonville markets. Eventually, Workscapes sold the South Florida locations which gave them the ability to move to Tampa & make Tampa their headquarters. They currently have 85 employees.

Elizabeth went on to discuss why Tampa’s momentous growth was so key when making the decision to relocate Workscapes headquarters. She also spoke about the importance to giving back to the community and that community involvement has been a large part of the Workscapes foundational culture, “It’s not about what you take from the community but what you can give. And we’ve always operated that way, from when we started with six people to now with our team of 85 people and their families.” She went on to tell us that they ask all of their sales team to get involved with a philanthropy of their choice.

Elizabeth discussed the importance of their partnership with Herman Miller, citing a statistic that 94% of Fortune 100 businesses do business with Herman Miller. She touched on some of the projects Workscapes has been involved in such as their work with Tampa General Hospital and Workscapes emphasis on their service & design expertise.

If you haven’t watched the latest episode of Elevate Today featuring Elizabeth Dvorak, CEO of Workscapes be sure you don’t miss it. Watch the full interview here: 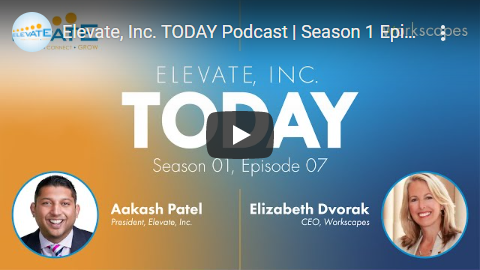